The Hockey team went unbeaten in the Active Schools Hockey Festival held at Weetwood Sports Centre. After a slow start the team soon found their stride and beat every team that stood in their way. After a tough morining of 7 games in which the team were unbeaten they then progressed in to the semi-final against Alwoodley Primary School who they beat 5-3. By this point the team were full of confidence and went in to the final with only one thing on their mind and that was to win the match and retain the title- and that they did.

The team will now go on to represent Leeds at the West Yorkshire Games on Saturday 25th March 2017. 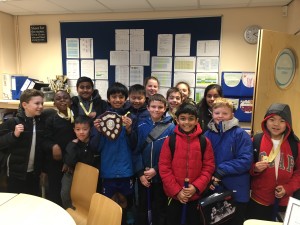 Allerton C of E Primary School cheerleading team got their just reward at the Active Schools Cheerleading Tournament held at The Ruth Gorse Academy. The team have been incredibly committed to the training and have been working hard to master their routine and that they did. I was proud of each and everyone of the team and they were a credit to the school and themselves. Well done Team A.C.E!! 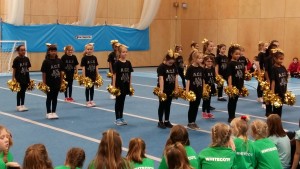 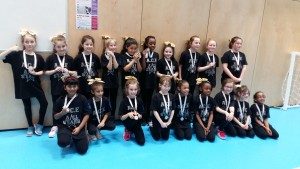 The netball team traveled to Harehills Primary School and carried on where they left off on Friday, the team battled the elements to run out 6-0 winners in what was a tough match against a good side. The team are going from strength to strength and it is great to see them get the results that their performances deserve.

The netball team put in a truly fantastic performance to beat Bramham Primary School 8-2. From start to finish the team did everything that was asked of them and they played with real confidence and skill.

The year 4 footballers exited the cup in the quarter finals in the cruelest way possible by being beaten 3-1 on penalties. The game finished 3-3 after full time and the score line remained the same after extra time, so there was only one thing for it ton decide the tie and that was penalties!!

Unfortunately Allerton C of E Primary School lost 3-1. The team played with real heart and having been behind three times in the match they worked incredibly hard to get themselves back in the game and it was a shame to see them exit the cup in such a way. I am confident that they will come back from the defeat and they should be proud of what they achieved and how they played.

The netballers found themselves on the wrong end of an 8-0 score line as they took on a very very strong Holy Rosary and St Anne’s side. The children put up a good fight but unfortunately they were up against a better side. I cannot fault the team for their effort and attitude and I am confident that we will improve on the score line in our next match.

Seven children from KS2 were selected to represent Allerton C of E Primary School in the Active Schools Inclusive Sports Hall Athletics Competition which was held at The John Charles Centre for Sport. The children took part in a range of running, jumping and throwing events and they were absolutely fantastic so much so that they have been selected to represent Leeds at the West Yorkshire School Games which will be held in March 2017.

The year 6 football team saw themselves knocked out of the League Cup in what was a very bizarre match against Shire Oaks Primary School.

Although the team started slowly and found themselves 2-0 down within minutes  they soon found their stride and adapted their game to the small pitch and went in to the half time break 2-1 down. I was confident that the team would draw level which they did very early in the second half and much the same as the year 5 game they created chance after chance but just could not find the back of the net, and they were punished for this late in the second half when Shire Oaks scored twice in quick succession to win the game 4-2 and proceed in to the next round. A tough lesson learned but again I am confident that the performances will continue to improve and we will start turning the score lines around.

The year 5 football team saw themselves the wrong end of a 3-1 score line!!

The team were fantastic from start to finish and played the best football they have played all year but they just couldn’t put the ball in the back of the oppositions net. It was a really frustrating game for all involved as the team worked so hard but just couldn’t convert their chances. Whilst a win would have been great I am still very proud of the way they played and I am confident that the great performances will start winning them games.

Keep up the hard work!!

The year 5 football team suffered a cruel defeat to St. Augustine’s Primary School. It was definitely a game of two halves as Allerton started slowly and found themselves 2-0 at half time, however  they turned it around in the second half and drew level within minutes. Both teams battled it out for the remainder of the half and it looked like it was going to finish 2-2 BUT a brief lapse in concentration saw St. Augustine’s score with the last kick of the game.